“I know it is quite awkward. But I have to say, I am letting go of this pursuit.”

These were the words he uttered and could remember the last time he talked to her about their relationship.

How did it happen? How come they end up this way?

He met her when they were in college.

Unlike any other friendships, theirs is different. They weren’t that close and their encounters were mostly casual. Although they were part of a team in the campus church they attended, their encounters revolve only around practices and performances – nothing more, nothing less.

So to the common minds, little is the chance that a spark would develop. True enough, there was none or even a hint of it while they were staying in the campus.

The spark only started after both of them finished their respective degrees. The man was teaching as a college instructor then while the lady practiced her profession as a nurse when he began to entertain the thought that she might be the one right for him.

So he prayed about it.

He asked the Lord if He could make an opportunity for him to tell her that he is seriously considering her. This was granted. Thus, he decided to pay a visit to her and her family to announce his intention and seek permission. It was one of the best moments that had happened to his life. Although, short as it was, the stay still was worth it.

He went back to his teaching job in the university after the visit bringing with him the commitment that both of them will have to begin at flourishing the friendship first before moving into the next level of the relationship.

There was a common phrase to that – let’s just get to know each other first. Initially, he was very aggressive with that commitment. He always made sure that he would allot his time from his hectic schedule to communicate to her. He even sent gift and letter to her. It all went well.

But later on, the tide has changed…

Suddenly, he got promoted in the office and was given the leadership role. With this new post there came the overloaded responsibilities. Then he was overwhelmed. He was eaten up by his busyness, to the point of forgetting that other commitment he had. He messed up with his time. He had difficulties in finding the balance. He bungled up with his priorities. He even lost his spiritual appetite. He had backslidden. His self then became his new master.

So he made up his mind to make and fix himself right.

Sadly, it was done at the expense of letting go of her and the idea of them being the right one for each other.

At the heart of the story, we found those precious realizations. There are two important lessons that we can extract from here.

#1 When the Heart Isn’t Right, Everything Else Fails

The words of Michael Hyatt perfectly described it this way: If your heart is unhealthy, it has an impact on everything else. That’s why King Solomon warned us bravely that “above all else, guard your heart…”

In the beginning of the story we see that everything seems alright. The man started out his pursuit so fresh and right. In fact, he consulted the matter and employed the blessings from above. But we found along the way that there were constant attacks being made to destroy the condition of his heart. Until there came a time that he was caught off guard. The attacks weren’t actually one time but came in a persistent manner until he was left entrapped.

Points to ponder: We have to constantly guard our heart if we want to prosper with our desire for a successful relationship.

Some may have found the decision of letting go as pusillanimous. But I think it’s a sign of strength, especially when that giving up means that both of you will be liberated from the unnecessary cares of a failed courtship.

Letting go of the person whom you once loved is hard. However, if we soak ourselves to the basic premise that we are not in control of everything, including the kind of love stories we wish to have, then we will have the courage do the letting go.

It’s easier said than done. But we have this someone that showed just that. We have Jesus.

In his own extremely tough prayer Jesus asked: “Father… yet not my will, but yours be done”. Let God do what He wants. We trust in the sovereignty of God’s plan.

Today, as far as I know, the two remain friends and in good terms. They understand that in the fullness of time, each one of them will find the right one God has chosen.

It doesn’t mean that our future spouse will be perfect. That will never happen. What I am trying to say is that under God’s guidance, He will usher you to the person who is going to be the perfect best match for you. I know that God pairs us up with people that complement us – if we let Him, if we surrender to Him.

Remember, that He will make everything beautiful in its time (Ecc. 3:11).

So while waiting for the right one, I’ll make my heart right.

(Do I sound like I am that person in the story now? Your guess is just as good as mine.) 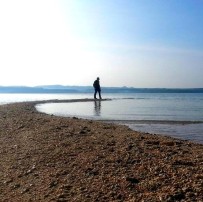 Lino is an ordinary Development Worker. He loves writing but isn’t a writer. He loves to read but isn’t a book author. He is a pastor’s kid, though. He likes to talk with pastors but isn’t a pastor (yet). But, yes, he desires to enter into an evangelical theological school. He currently lives in the Philippines’ Queen City of the South— Cebu City. You can read more of his works here.